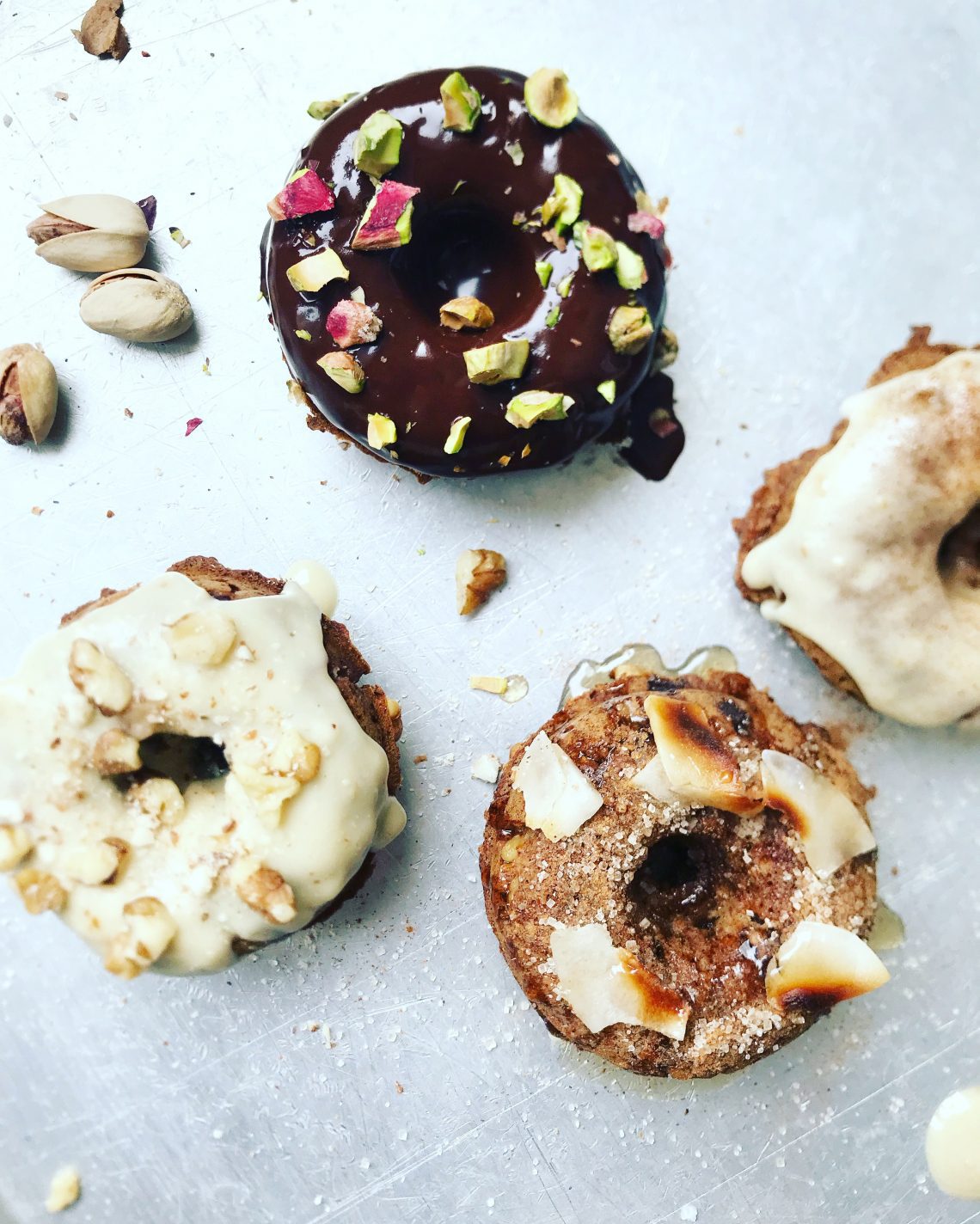 For a long time, the only vegan treats available on the market were bland fruit and nut bars. It’s amazing how much the vegan sweet scene has advanced in recent years, and now pretty much any type of dessert can be veganized. Brisbane is home to loads of bakeries, cafés and pop-ups selling the most delicious vegan cakes, doughnuts, pastries, brownies and more. Keep reading for the ultimate Brisbane Vegan Sweet Treat Guide.

Veganyumm is a 100% vegan bakery specializing in cupcakes, brownies and vegan cheesecake. They also do full size cakes for sharing too.

Well worthy of a place in the Brisbane Vegan Sweet Treat Guide, Brisbane Vegan Markets is the perfect place to get your sweet fix. Head to Boundary St in West End every second Sunday to pick up vegan donuts, cupcakes, ice cream sundaes and cookies among many other delights.

Classic French patisserie is going vegan at French Tarts. Firstly, you have to try their seriously authentic vegan croissants and pain-au-chocolat. Additionally, they do amazing filled doughnuts and chocolate brioche.

Family run bakery Farine does the best vegan croissants in the whole of Brisbane. Besides that, you can get vegan danishes and custard donuts too. Over 50% of the display cabinet is vegan so you’ll definitely find something you love.

It’s pretty obvious what this dessert company specializes in & their four vegan options are truly spectacular. Obviously, my favorite is the ‘Liam Hemsworthy’ red velvet donut with cookies & cream frosting, crushed biscuits and chocolate drizzle. The classic raspberry jam filled donut is also vegan as well as the ‘Get Ready to Crumble’ with caramel glaze, apple & cinnamon filling and pecan crumb.

This is an ice-cream chain celebrated across Australia with a bigger-than-average vegan range. Firstly, you have to try the new strawberries & cream tart ice cream which is 100% vegan and absolutely delicious. Also, I love the cookies and cream scoop or the creamy chocolate gelato. The traditional cones are vegan too!

This super popular donut joint has three incredible vegan donuts on offer. Naturally, my favorite is the dark chocolate and peanut butter donut. On the other hand, punters love the original glaze donut coated in toasted coconut.

The Real Thing’s vegan sweet treats are definitely on the healthy side of the spectrum, but they’re still delicious. First up, I love their chewy granola bars with a cup of coffee. Alternatively, go for the walnut and date bliss balls for a quick energy hit.

100% vegan juice bar Charlie’s does an amazing selection of vegan cakes and sweet treats. They change daily so you’ll have to head there yourself and see what delicious suprise awaits you.

You’ll find freshly baked vegan cakes on offer every day at More Wholefoods. They don’t have a menu and the choice available will depend on which day you go, but that’s all part of the fun, right?

Sol does an amazing vegan chocolate pumpkin cake, as well as plenty of other treats that rotate daily.

Specializing in my two favorite things, vegan diners at Cowch can sip on a cocktail and eat dessert at the same time. Don’t miss the vegan chocolate sundae made with cocoa sorbet on a bed of Oreos and topped with strawberry coulis, fresh strawbs, more Oreos and dark choc drizzle.

Head to Boundary St Markets every Friday, Saturday & Sunday evening for amazing jam-filled vegan doughnuts. The Organic Frog cooks them fresh in front of you and they’re also gluten-free.

Hey Joe does great vegan coffee and cake at its East Brisbane eatery. Go for an oat flat white with their homemade banana bread covered in berry compote.

There’s a fine line between breakfast & dessert, but I think the famous French toast at Grown just about covers both. It’s topped with seasonal fruit, maple syrup and ice cream for a real sweet treat.

Whisky Business makes loaded doffles (doughnut waffles) and pancake stacks that can be made vegan on request. They’re topped with dairy-free ice cream and fresh fruits.

Obviously, you’re going to get good tiramisu at a 100% vegan Italian restaurant. Soaked in Frangelico hazelnut liquor, it’s the perfect dessert to satisfy those sweet cravings.

A post shared by Arrivederci Pizzeria (@arrivedercipizzeria) on Feb 8, 2020 at 10:53pm PST

Make sure you leave room for dessert at this epic vegan tapas bar. The vegan lemon meringue is out of this world.

Desserts at Italian-Asian restaurant Loving Hut (which is also fully vegan) include chocolate chip ice cream sundae with Oreos. Also, they do a classic Affogato which is espresso over vanilla ice cream topped with whipped coconut cream.

Want a vegan cake with that extra special touch? The below vegan businesses make 100% plant-based cakes to order.

Pippa’s Pantry has been making decadent vegan occasion cakes for years and pretty much everything can be made gluten-free on request. As well as servicing Greater Brisbane, you’ll find Pippa at Brisbane Vegan Markets serving yummy vegan treats every second Sunday.

The Little Vegan & Co. is a home-based bakery specializing in multi-tier occasion cakes. Alternatively, you can order custom-made macarons, cupcakes & cookies to be delivered to your door.

Another custom bake shop, plant-based Earthy Cakes is the perfect choice for your special occasion bakes. Also, they have an online shop where you can order baked vegan cheesecake, cupcakes and macarons to your door.