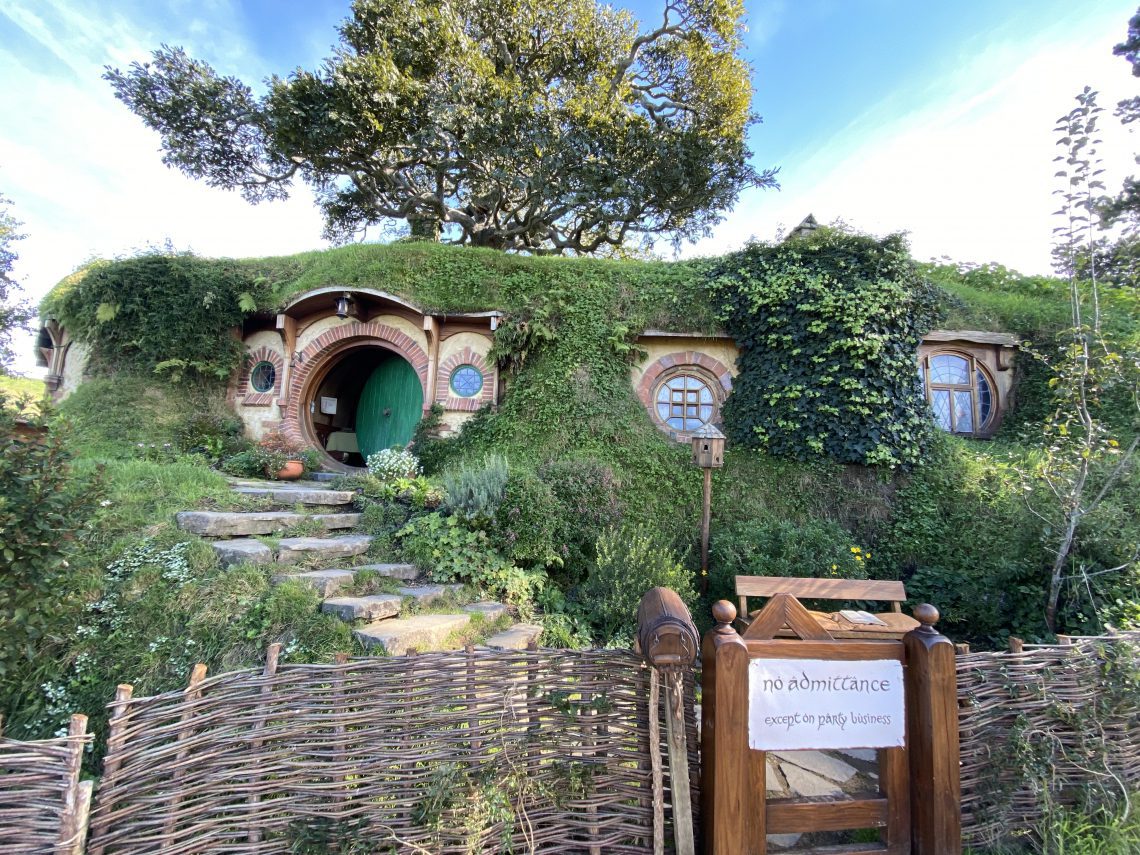 Find any New Zealand travel guide on the internet and I can pretty much guarantee it will recommend the Hobbiton Movie Set Tour.

Featuring heavily in The Lord of the Rings & The Hobbit trilogies, the 12-acre set was the chosen filming location for the fictional village of Hobbiton in the Shire, home to the Hobbits.

Each year, around 650,000 visitors flock to the movie set, keen to experience the magic of Sir Peter Jackson’s movies for themselves. But is the Hobbiton Movie Set Tour worth it?

Is the Hobbiton Movie Set Tour Worth the Money?

At $89 a ticket ($65 USD) for a guided tour of the Hobbiton Movie Set, we were initially unsure about making a booking.

We were at the beginning of a one-month road trip around New Zealand on a backpackers budget, and $89 each seemed steep for a two-hour experience which didn’t include any food or adrenaline-filled fun.

However, after some consideration we realised that there were three reasons to go ahead and book the tour:

After completing our tour of the Hobbiton Movie Set, I can honestly say that the ticket price is so worth the money and that this was one of the most magical experiences we have had whilst travelling New Zealand.

First thing’s first, if you’re a fan of the films then you’ll be amazed by Hobbiton and the fact that it looks exactly like it does in the movies.

The lush green pastures and rolling hills you’ve seen at the cinema are even more magical in real life and the 44 hobbit holes are seriously impressive up close.

Every single detail has been thought through meticulously, from the hobbit clothes hanging on washing lines to the pots of honey for sale on doorsteps and the real vegetables growing in the veggie patch.

How Much Does the Hobbiton Movie Set Tour Cost and What’s Included?

The price includes a guided tour of the 12-acre Hobbiton Movie Set by an enthusiastic and knowledgeable guide, as well as coach transport to/from the set from the carpark and ticket centre (The Shire’s Rest). In addition to this, you’ll also receive a complimentary drink from The Green Dragon Inn at the end of the tour. In total, the tour lasts around two hours and the time will fly by because you’re having so much fun.

The entrance fee for Hobbiton Movie Set is $89 for adults, $44 for youths (9-16) and kids below the age of 8 go free (this seems fair to me as we had a few young kids on our tour and they had no idea what LOTR was). I wasn’t able to find a promo code for Hobbiton tickets, but you can get a family pass discount if your group consists of 2x adult and 2x youths, which saves you $41 in total.

Can You Visit Hobbiton Without Paying for a Guided Tour?

Unfortunately, it’s not possible to visit Hobbiton without a guided tour. The movie set is located in the middle of Alexander Farm, a huge 1250 acre working sheep & beef farm. You’ll be transported to the movie set by coach from The Shire’s Rest (departure point) and no other vehicles have access to the road because it’s private land.

What Do You Get to See on the Hobbiton Movie Set Tour?

From the car park and visitors centre you’ll be transported by coach through lush green fields to the Hobbiton Movie Set. The journey takes around fifteen minutes, during which your tour guide will tell you some interesting facts about the history of the set.

Your guide will also play a short video on the coach TV screens where director Peter Jackson will tell you all about the aerial search in 1998 and why they decided on Alexander Farm as the perfect location for Hobbiton.

During this journey you’ll be amazed by the beauty of the location and you really feel as though you’ve entered The Shire.

Once you arrive at the movie set, you’ll pass through a small picket fence and walk the stone-lined path from the iconic scene in The Hobbit: An Unexpected Journey when Bilbo runs out of Hobbiton village whilst shouting “I’m Going On An Adventure!”.

From here, you’ll explore several different Hobbit holes along with the veggie patch and the pond before heading up the big hill towards Bag End.

At Bag End, you’ll be able to see the legendary home of Bilbo Baggins, complete with the ‘no admittance except on party business’ sign on the garden gate and the iconic oak tree on top of the house. You’ll learn that the oak tree is actually fake and made of fibreglass! Even more impressive is that all of the 1000+ leaves are made of silk and were imported from Taiwan, before being individually hand-painted and attached to the branches.

Next, your tour guide will take you down to the ‘party tree‘, a huge pine tree overlooking the lake which was integral to J. R. R. Tolkien’s vision of Hobbiton and one of the main reasons why director Peter Jackson chose the site. You’ll be able to walk across the field where Bilbo celebrated his eleventy first birthday in the shadows of the tree with fellow Hobbits, who were actually the children and spouses of the film crew in real life.

After leaving the party field you’ll walk towards Samwise Gamgee’s house to admire the beautiful wildflowers in his garden and the real smoke coming from his chimney (fish is smoked here and sold in the The Green Dragon Inn).

From here, you’ll walk past the mill complete with a functioning water wheel and over the stone bridge which crosses the millpond to The Green Dragon Inn.

After all that walking you will have definitely worked up a thirst, so it’s time for a complimentary drink in the Inn by the roaring log fire.

The Inn offers a variety of exclusive Southfarthing Distillery ales and ciders which you can only purchase from Hobbiton and they’re truly delicious. We also got beef and ale pies for $6 each which were absolutely incredible.

On the coach back to the car park, you’ll watch a compilation of Lord of The Rings clips which showcase all of the significant locations across New Zealand that represent Middle Earth in the movies. Given that both the LOTR & Hobbit trilogies were filmed entirely in New Zealand, the footage will make you so excited about the rest of your trip around the country.

Can You Go Inside the Hobbit Holes at Hobbiton?

Unfortunately, it’s not possible to go inside the Hobbit holes at Hobbiton. That’s simply because there is nothing inside them, just retaining walls and beyond that dirt.

Many visitors to Hobbiton think they’ll be able to go inside Bag End and see where Gandalf hits his head on Bilbo Baggins’ low ceiling, but the interior was actually filmed in a studio in Wellington.

Where Is Hobbiton Movie Set and How Do You Get There?

Hobbiton Movie Set is located in Matamata in the Waikato region of New Zealand’s North Island. It’s approximately 160km south of Auckland and the drive takes just under two hours.

Most road-trippers visit Hobbiton on the way to Rotorua, a city famous for geothermal activity, bubbling mud and Maori culture which is about 70km away.

Do You Need to Book Hobbiton Movie Set Tour in Advance?

Can You Stay Overnight at Hobbiton Movie Set?

Currently there are no facilities for an overnight stay at Hobbiton Movie Set. If you have a late-afternoon tour or you are lucky enough to experience one of the evening banquets at Hobbiton, definitely stay at the wonderful Hills Vista Lodge which is just 2.4 miles from the set. Other great accommodation options near Hobbiton are Peria Hills Cottage, Denchys B&B and Chalet Frodo.

What Do You Need to Bring With You for the Hobbiton Movie Set Tour?

The most important thing to bring with you to Hobbiton Movie Set is your camera. With 44 Hobbit holes to explore and not a power line or road in sight, there are ample photo opportunities and the guides are happy to take group and couples photos at various locations.
*Top Tip: Morning is the best time of day to visit Hobbiton as the sun shines directly on the village.

You’ll also need to bring comfortable footwear as you’ll be walking up hills on dirt tracks and across fields. Hobbiton Movie Set Tours go ahead in sun, rain, snow and hail so it’s worth checking the weather forecast beforehand and bringing a raincoat if necessary, although the helpful guides do keep some spare rain ponchos in the Hobbit holes in case of emergencies.

Hobbiton Movie Set Tour has excellent reviews, with a score of 4.7 on Google with over 10,000 reviews and a score of 4.5 on Tripadvisor.

It’s definitely a great idea to visit Hobbiton Movie Set alone. In fact, you’re sure to find some other LOTR enthusiasts on your tour to buddy up with.